Mohan Pai
Environmentalist. Born (1938)into Pai-Dhungat family of Verem Goa, spent his early childhood in Goa and in Mumbai. Educated in Mumbai. Retired from Adertising & Marketing a decade ago. Writer on environment and ecology. An avid photographer he now lives in Bangalore. Founded and involved with the running of OMASHRAM, an old age home at Bangalore. Books authored: The Western Ghats, Mahadayi/Mandovi River Valley, The Flight of Gods, The Elderly.

An Article by Mohan Pai 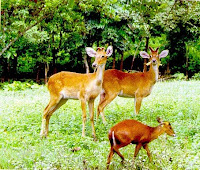 The Sangai, the brow-antlered deer is found only in Manipur and only 162 animals survive.
The Sangai was believed to be almost extinct by 1950. However, in 1953 six heads of the Sangai were found hovering at its natural habitat. Since then, the State Government has taken serious and positive measures for the protection of this rare and endangered species. The Sangai is also the state animal of Manipur and is projected as the social and cultural identity of the state..The Sangai lives in the marshy wetland in Keibul Lamjao National Park( 40 sq km). Its habitat is located in the southern parts of the Loktak Lake, which is the largest freshwater lake in Eastern India. It is also one of the seven Ramsar sites of international importance. The habitat of the Sangai is now a protected area.

The Sangai Forum was formed to protect the Sangai and other wildlife like hog deer, wild boar, Indian otter, civet cat, box turtle, and migratory water birds who have their home in the National Park. Although banned by law, hunting of the Sangai and other wildlife continues. Then again people hunt the deer for its meat. The Loktak Hydroelectric Power Project too has become a threat to the Sangai habitat. A constant high water level is maintained in the lake and this has led to many changes, one of which is the rise in the water level in the Keibul Lamjao National Park during the rainy season. Manipur experiences heavy rains during the monsoon season. So, the Sangai's home is constantly threatened. What happens during the rainy season is that the deer seeks shelter in isolated dry patches in the National Park and poachers lie in wait for such opportunity. Many times the deer drown. One of the duties of the Sangai Forum volunteers is to keep a watch for signs of danger. They organise search parties to locate deer that are in trouble inside the park. They also keep a lookout for the poachers and organise awareness campaigns in villages, stressing on the importance of the Sangai and the need to save it. The villagers are requested to report to the nearest Sangai Forum unit if they have any news of the deer in danger. Forum volunteers also work with Forest officers and forest guards to protect the deer. In January 2003, Sangai Forum volunteers caught two poachers who had killed a Sangai. The poachers were handed over to the local Police Station and a criminal case was filed against them.
Present status:It is reported that there are only around 162 Sangai deer left in Keibul Lamjao National Park.This last natural habitat of the deer - covering a total of 40.5 sq.km with a core zone area of 15 sq.km, is peculiar by itself as it is mostly made up of the floating biomass locally known as Phumdi. The KLNP forms part of the southern portion of the greater Loktak lake, and so the park is within the water body area of the Loktak. It is for this reason that the park has often been termed as the 'only floating national park in the world'.

The Sangai faces a two-pronged danger to its life. Firstly, its habitat is steadily degenerating by reason of continuous inundation and flooding by high water caused as the result of artificial reservoir of the Loktak hydroelectric power project. Secondly, poachers are out there to trap and slay the deer at the slightest opportunity. In February 1998 poachers trapped two Sangai doe inside the KLNP, killing both female.

In 1983 the 103 Megawatt capacity Loktak hydroelectric power project was commissioned with the objective of ensuring rapid development in the State. One failure of the project has been that it has never been able to provide regular power supply to the villages in the Loktak lake periphery. And a very disturbing effect of the project has been its share of harm to the ecology and the environment of the Loktak, threatening the lake ecosystem, the humans and their lands, the wildlife, and all other life forms dependent on the lake for their living.
A maximum high water level of 168.5 meter above MSL is maintained in the Loktak Lake to feed the reservoir for the hydel project. At this level, much of the land on the periphery of the lake had been submerged under water, rendering huge loss of productive agricultural lands and localised fish culture farms. On the other hand, this high water level had wreaked havoc in the KLNP. The high water level, maintained continuously through the year, had disturbed the natural life cycle of the vegetation growth, the through the year, had disturbed the natural life cycle of the vegetation growth, the phumdi, upon which the Sangai thrives. The deer feed on several types of vegetation that grow on the phumdi. The vegetation also provides shelter to the deer and other wildlife in the park.

The life-cycle of the phumdi involves floating on the water surface during season of high water as in the monsoons. In the lean season, when the water level reduces, the biomass come into contact with the lake bed and they secure the required nutrient from there. When the rains come again and they become afloat, the biomass have enough 'food' - the nutrient - stored in their roots and their life continues. What is happening now, according to local scientists who are studying the phenomena, is that with continuous high water in the lake throughout the year much of this process of 'feeding' on the nutrient in the lake bed had discontinued. The result - the biomass are losing weight and getting thinner by the year. Around January last week in 1999, it was reported that a large chunk of the biomass in the northern part of KLNP had broken up into pieces and had drifted freely from the park area. This was a bad sign for the Sangai habitat.
Very recently this year, reports came in about local people cutting up the phumdi into sizeable pieces and then towing away these with dugout canoe for 'selling' to fish culture owners. This is another potential danger to the Sangai habitat. It meant humans are now aiding the process of annihilating the habitat area, supplementing to the rapid degeneration of the habitat.
Conclusion:
The Sangai - a jewel in the crown for Manipur - is one of the most unfortunate animals living in the world today. Human activity - read development process - had caused extensive damage to its last natural habitat, threatening its very existence. Humans continue to hunt and slay the deer on the sly in spite of legislation (Manipur Wildlife Protection Rules 1974) and public outcry. There is no State sponsored conservation programme for securing the safety of the deer and its habitat. Manipur is poised to lose this animal wealth, forever, if timely help does not come now.
MY BLOG LIBRARY
For some of my articles visit:
http://mohanpaiblogger.blogspot.com/
http://mohanpaisarticles.blogspot.com/
http://biodiversity-mohanpai.blogspot.com/
For some key chapters from my book "The Western Ghats", please log on to:
http://westernghats-paimohan.blogspot.com/
For detailed blog (6 Chapters from my book) on Mahadayi/Mandovi River Valley, please log on to:
http://mohan-pai.blogspot.com/
For the book 'The Elderly' please log on to:
http://omashram.sulekha.com/blog/posts.htm
http://oldagecare-paimohan.blogspot.com/
You can also access my blogs on Sulekha and Wordpress
http://mohanpai.wordpress.com/
http://mohanpai.sulekha.com/blog/posts.htm
For my book "The Flight of Gods - Hindu Temples & Shrines of Goa" please log on to:
http://flightofgods.sulekha.com/blog/posts.htm
http://flightofgods.blogspot.com/
For “Miscellany” log on to:
http://paimohan-mohanpai.blogspot.com/
(Traditional Hindu Central Courtyard Houses of Goa)

helo sir..
this is abhishek.. i just now gone through on ur article on "the sangai"., crown of manipur..
its really sad to hear all residing facts on such beautiful species.., not only sangai but others also, as mentioned in other articles.. about the others i know, tiger is the one i know most.. but one thing which i certainly want to discuss wid u.. that in most of the documentary or other articles., i came up in hearing problems n worst scenario of the species.. as o common man like me who is far away from this situation residing in concrete jungle and stuck in other resposible act for family n others..who wants to do something for them.. but how come..??
though m only a student right now but really wanna to do something for them... is there any possible way..??
hope u understand a feeling of youth..!!
abhishek anand,
studing architecture from delhi
abhishekanand_08@yahoo.co.in
09999367469

Hello Sir,
Good to know about your concern and love for Sangai. But the figure of sangai count to 6 in 1953 seems confusing and misleading. Can you please provide the reference to this (may be i lack some references). Also the barrage height is to be typed as 768 m.
I appreciate you for your concern for this species. People who cares for the wildlife like you are few. Great work. Keep it up.

many thanks
please visit on
http://birdswatchinggropratlam.blogspot.com

I see your articles every week and am touched by your love for environment, which I also share.

Sir you are doing Great work for our natural treasure.

Glad to know that Dear.....hope you had a great holiday at bandipur resorts .... if you have any special experience of on KGudi Resort or B R Hills to share with us , that would be nice and helpful to others :)